MIAMI — The Hidalgo siblings buried their younger brother, Patrick, six days after he had texted them in the middle of the night last March to say that something was wrong: He was gasping for air. Two days after that, paramedics found his body in his Miami Beach apartment. One […]

MIAMI — The Hidalgo siblings buried their younger brother, Patrick, six days after he had texted them in the middle of the night last March to say that something was wrong: He was gasping for air. Two days after that, paramedics found his body in his Miami Beach apartment. One of his hands still held a rosary.

To his Mass of Resurrection came relatives from California and Maryland, ex-classmates from Boston, former colleagues from Washington. A woman he loved flew in all the way from Dubai.

In the following days of March 2020, the coronavirus brought life in the United States to an abrupt halt. Only then, as their shock subsided and grief deepened, did the Hidalgo family start to wonder if Patrick, their 41-year-old brother who had radiated light and glued them together, had died of Covid-19.

Families who lost someone with little warning and no obvious explanation in those whirlwind early days of the pandemic were robbed of the comfort of knowing exactly what took the person they loved.

Patrick died in that murky period a year ago when the nascent virus outbreak — where it came from, how far it had traveled — was only beginning to be understood. As the first deaths were recorded across the country, families like his found themselves in a state of haunting uncertainty that has never gone away.

There have likely been half a million more deaths linked to the virus than what has been officially reported, including more than 68,000 in the U.S., according to analyses of death rates around the world. Some families have gone to great lengths to try to get death certificates revised to list Covid-19, or to prove that the deceased had the virus in the first place. They often have little help from the authorities, who are swamped — or, some people fear, downplaying the virus.

Unable to obtain definitive proof, families are left with the uneasy feeling that, had it not been for the pandemic, their loved one might still be alive.

“I don’t know that we’ll ever have closure or fully understand,” said Rosie Hidalgo, one of Patrick’s four older siblings. “And that’s hard.”

That the virus could have contributed to Patrick’s death had not immediately occurred to them. Patrick died on March 2, 2020, the day after Florida announced its first confirmed Covid-19 cases. He was buried on March 7. The National Basketball Association suspended its season, a decision that made the crisis feel real to many people, on March 11.

On March 13, a cousin who had gone to Patrick’s funeral, Mayor Francis Suarez of Miami, tested positive. Other attendees wondered if Mr. Suarez had exposed them before realizing that he had likely become infected after the funeral.

In June, the Miami-Dade County medical examiner concluded after an autopsy that Patrick had died of undiagnosed hypertensive heart disease, noting an enlarged heart. Some of Patrick’s siblings rushed to doctors to check if they too might have sick hearts that could give out.

But it nagged at them. Heart disease? Patrick suffered from serious acid reflux, but he ate egg whites and spinach and frequented the gym. He went to the doctor right away when he felt ill. What if the autopsy was wrong?

“Within literally days of his death, Covid became a thing — it kind of burst into the social consciousness,” said Mike Llorente, a friend. “It seemed to me to be a much simpler answer.”

The siblings — Ellie, Rosie, Manny and Bibi — could not stop thinking about the possibility. The children of Cuban exiles, they were raised in a deeply Catholic family big on community service and civic duty. Their mother, Eloísa Suárez Hidalgo, had been a political prisoner in Cuba. Their father, Manuel J. Hidalgo Sr., whom Patrick took to Mass on Sundays, made a point to bring his young children with him when he went to vote.

Patrick grew up in Miami, left for Georgetown, Harvard and M.I.T., and returned as a political organizer and social entrepreneur five years before his death, sending his siblings, all of whom lived in other states, updates about their parents via videos and texts.

“Every morning I wake up in shock,” said his sister Bibi, who hardly let a day go by without speaking to her brother. “Every night, I can’t go to bed, thinking, ‘I can’t tell my little brother good night. I’m not going to get one of his funny memes tomorrow.’”

Patrick believed Miami needed people like him, a former Obama administration staffer who contributed to the president’s 2016 speech in Havana. Mr. Obama sent his family a condolence letter that remembered his “kindness, exceptional intellect, devotion to faith, and tenacity to fight for a better tomorrow.”

Eleven days before he died, Patrick told a New York Times reporter about the Miami Freedom Project, an initiative he co-founded to advance progressive policies among the city’s immigrants and their descendants, who tend to resist proposals that remind them of the left-wing Latin American governments they left behind.

“This community is all about freedom, especially those that have fled dictatorships,” he said. “It becomes this driving force of your life, or your parents’ and grandparents’ lives.”

Patrick’s siblings sifted through text messages to trace his final days. A physical therapy appointment. The gym. Friday night out with friends. A presidential campaign event for Senator Elizabeth Warren. A prayer group in his apartment the night before he died.

They read and reread the text message to the family group chat about waking up in a cold sweat, short of breath. He thought it was related to stress. That morning — Sunday, March 1 — Rosie called Patrick to ask if he was OK.

“He said no,” she said. He told her he felt tired and rundown, as if he were coming down with something.

“He was so involved in so many things,” she added. “He thought, ‘Maybe I’m just running myself ragged.’”

It was the last day Patrick was seen alive. He sent his final text at around 1 a.m. on March 2. The paramedics found his body a day later, on Super Tuesday.

When Rosie and Ellie Hidalgo went to pack up his apartment, a doorman recalled how Patrick had bid farewell to his prayer group at the entrance of the building on the eve of his death. He had a cough and told the doorman he did not feel well. “That’s the last person he ever spoke to,” Rosie said.

The siblings asked the medical examiner’s office five times between April and June to send samples of Patrick’s remains for coronavirus testing. Darren J. Caprara, an office spokesman, said the tests are conducted only when justified, and there were “no obvious indicators” when Patrick’s body arrived in March.

“Symptoms such as shortness of breath and a cough were brought to our attention long after we had determined his cause of death from autopsy,” Mr. Caprara said in a statement. Based on Patrick’s medical history and the autopsy findings, he said, his office stands by its ruling that hypertensive heart disease was the cause of death.

Through a friend, the family reached Dr. Charles C. Marboe, a pathology and cell biology professor at Columbia University Medical Center, and hired him in May to consult on Patrick’s case. Dr. Marboe reviewed the autopsy tissue samples and completed a two-page report in October.

“I do not see a specific definitive cause of Mr. Hidalgo’s death in the material provided,” he wrote.

But one autopsy finding was of note: acute lung injury that included bleeding in tiny air sacs called alveoli. He had seen similar symptoms in many early Covid-19 deaths in New York.

The lung bleeding could also have been caused by another viral infection or from gastric acid, he said, though no food particles were found to suggest that Patrick’s reflux was the cause.

“It looked similar to changes that we have seen due to Covid-19 damage,” he said.

There was no way to know for sure, in part because of the poor quality of the tissue samples, a consequence of the days that elapsed between Patrick’s death and when his body was found.

“I feel bad about it, because I know it’s not any help for the family,” Dr. Marboe said.

When the nation’s first coronavirus deaths were reported early in 2020, many people wondered whether symptoms they’d had that winter might have been caused by the coronavirus. Experts in the United States have said it was likely most of those illnesses in December 2019 and January 2020 were the flu. But by the time Patrick died, it was March, when the virus was already spreading.

Patrick’s siblings felt validated by Dr. Marboe’s report. They publicized it and denounced elected leaders’ failure to alert the public earlier that the virus was likely spreading. They said there was a “high probability” that Patrick had died of Covid-19 because of the “willful negligence” of former President Donald J. Trump, the state and the county, who had failed to warn the public that it was dangerous to continue going about their lives as usual when a deadly virus was on the loose.

After his death, one of Patrick’s nieces enrolled in the University of Miami and campaigned for President Biden, as her uncle might have done. Another niece took a semester off from Tufts University and worked for the Miami Freedom Project. His family and friends dedicated Election Day to him, going precinct to precinct to deliver personal protective equipment, snacks and water.

On Tuesday, the one-year anniversary of his death, the family held a memorial Mass at a chapel at Georgetown University, his alma mater. A musician played “Amazing Grace” and The Beatles’ “Let It Be.” More than 100 people joined on Zoom.

Through tears, Bibi led the prayers of the faithful.

“We lift up a special prayer for everyone who has passed away due to Covid-19,” she said. “Including our dear Patrick.”

Mon Mar 8 , 2021
LA County is considering returning a beachfront property that was seized nearly 100 years ago. The property was taken away from the Bruce family in 1924, according to KABC-TV. Willia and Charles Bruce were reportedly the first Black landowners in Manhattan Beach, California.  Visit Insider’s homepage for more stories. LA […] 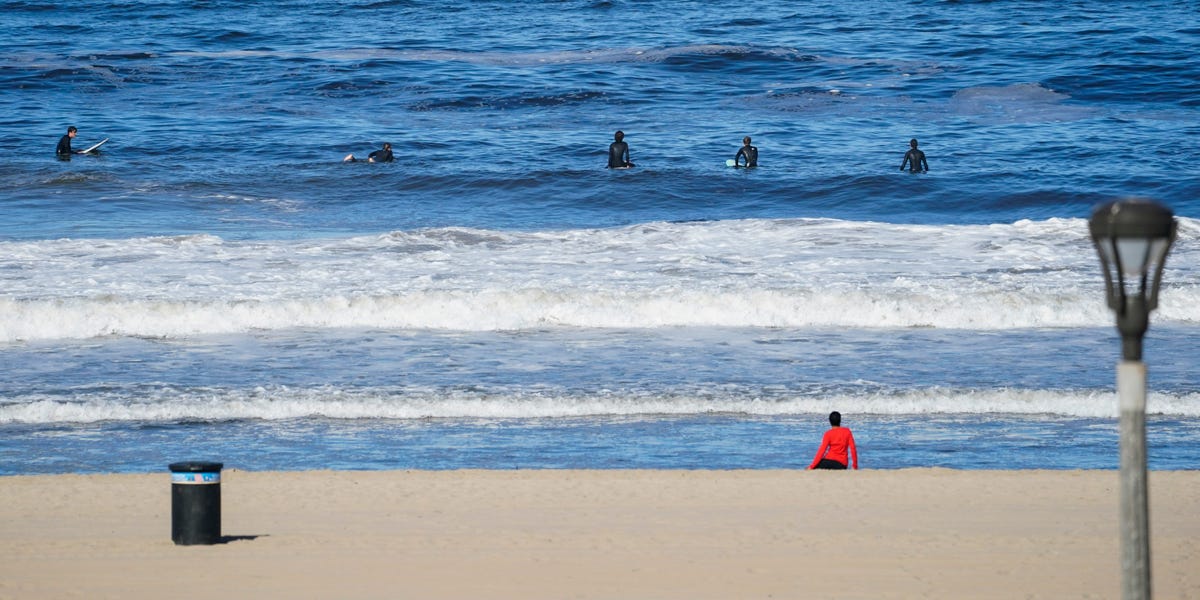