KANSAS CITY, Mo. — The family of the mom killed and left in a bag on the side of a rural road feels one step closer to justice.                Two people were charged over the weekend in the death of Ariel Starcher. The announcements came nearly one year to the day […]

KANSAS CITY, Mo. — The family of the mom killed and left in a bag on the side of a rural road feels one step closer to justice.

Two people were charged over the weekend in the death of Ariel Starcher. The announcements came nearly one year to the day after her body was found in February 2020.

“She was a very bright, bubbly. She was just very nice to meet,” said Ariel Starcher’s biological grandfather and adopted father, Jim Starcher. “She was just pleasant.”

Investigators found the 21-year-old mom’s body in a bag on the side of the road in rural Buchanan County.

“You hear about other people when they lose their father or brother or sister. They say there’s a hole in their heart, tnd that’s just the way I feel,” Jim Starcher said. “My life is not complete because she’s not in it.”

But Jim Starcher never gave up hope that someone would be arrested.

Deputies said citizen tips led Independence police to Marcus Brooks. They want to talk to him about the killing, but right now jail records show he’s being held on charges from another jurisdiction.

The Starcher family knows him through Ariel.

“When we were all together up in Kansas City, she’d talked to Marcus over the phone,” Jim Starcher said.  “And she’d call him asking, ‘Can I get a ride? I need to go over here.’”

Deputies said they aren’t searching for anyone else in connection the case. No details on a possible motive have been released.

“I hope they pay dearly,” Jim Starcher said. “I’m not going to be the type that says give mercy to Stoughton and Brooks. No. I’m a firm believer in justice, and I’m praying that justice will come through for Ariel.”

Tue Feb 23 , 2021
The Washington Post raised eyebrows on Monday night for a report on the first newly opened “migrant facility for children” under President Biden, which critics compared to the “kids in cages” mantra that was pushed during the Trump administration.  “Dozens of migrant teens boarded vans Monday for the trip down a […] 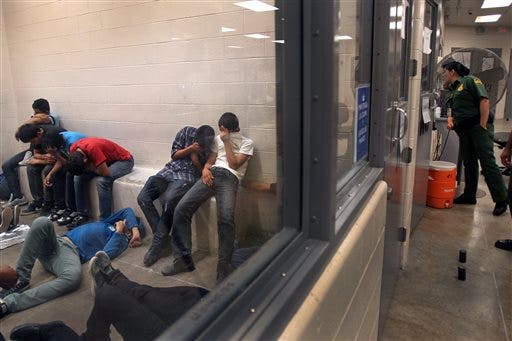