The gray sky hanging over an Excelsior District parking lot was interrupted by a ring of sky blue. It was 9:30 a.m., and a circle had formed consisting of volunteers from Excelsior Strong dressed in cerulean jackets, each energized to finally open a Covid-19 vaccine site that for months they’d […]

The gray sky hanging over an Excelsior District parking lot was interrupted by a ring of sky blue. It was 9:30 a.m., and a circle had formed consisting of volunteers from Excelsior Strong dressed in cerulean jackets, each energized to finally open a Covid-19 vaccine site that for months they’d advocated for. Amid the wind, Rocio Perez, one of the site leaders, grinned across the white tents where community members would get their shots: “It’s going to be a great day.”

On Wednesday, the community groups Excelsior Strong and the Latino Task Force, in tandem with the San Francisco Department of Public Health, launched a community vaccination site on 20 Norton St., a SFMTA parking lot just off Mission Street. San Franciscans who are eligible under state standards can “roll up their sleeves and get the vaccine” or register for one in advance. By 9:30 a.m. on Wednesday, 150 appointments were solidified, and at least six neighborhood residents began forming a line to claim a dose.

Samaya Pupiro, 18, who works in family and senior housing in the Excelsior, was among the first to roll up her sleeves. She hates needles, but decided to get one after her co-worker did. “I want to go out again,” Pupiro said. Right before the nurse injected her, she closed her eyes and said, “Sorry if I scream.” (She didn’t.)

The Excelsior District and other southeast sector neighborhoods like the Mission and the Bayview have consistently reported some of San Francisco’s highest transmission rates and case numbers of Covid-19. The Mission and Bayview each have their own vaccine sites, making the Excelsior’s the third that the city has dedicated to “highly impacted neighborhoods.”

“Our community has been greatly affected, and we know that there’s been some doubts,” said Cristina Centeno, a site co-leader and volunteer with Excelsior Strong, who spoke in Spanish. “Having this nearby is convenient, and allows people to be educated about it. There’s been a lot of misinformation.”

Community organizers have been advocating for Covid-19 resources like testing, economic assistance and vaccines to be placed in the southeast areas for months, arguing that these residents need extra protection from the virus.

Jon Jacobo, the health coordinator of the Latino Task Force, said at first the city had “failed” to address these inequities, but more than a year later officials have followed the community’s lead to finally bring resources to these neighborhoods. In regard to the site today, Jacobo said, “it’s been a long time coming.”

Part of the way to attract low-income and other locals is by providing easily accessible sites. Rosario Cervantes, who has lived the Excelsior for 34 years, said she believes that the Excelsior site’s staff — most who are from the community, and some who are bilingual in Spanish and Chinese — will assuage some misinformation and build trust, especially among immigrant communities. The Excelsior District’s population is 48 percent Asian and 33 percent Latino; about 34 percent of households speak Asian languages at home, and 20 percent speak Spanish, according to 2016 city data.

In addition, the limited ability to walk up to register attracts interested neighbors who may not be as tech savvy or have access to a computer. Oscar Grande, who does community workforce at Mission Housing and is a leader with Excelsior Strong, passionately recounted how an older African American recognized the bright blue Excelsior Strong jacket off the street and inquired about getting a vaccine.

“Now, that man, Mr. Smith, has an appointment today,” Grande said. “You don’t need a smartphone. We’ll give you one right here.”

District 11 Supervisor Asha Safai commended the Excelsior site’s “low-barrier” structure on Wednesday. The site — which is located on an SFMTA parking lot, is around the corner from El Chico Produce Market and is a stone’s throw from the busy section of Mission Street — is also close to Muni lines and the Balboa Park BART station. Safai added another vaccine site will come to Lakeview in the Excelsior in two weeks.

“We have tremendous — let me say that again — tremendous leaders in the Excelsior, who have risen up and demanded resources in our community,” Safai said. “Thanks for showing us the way.”

As of this week, San Francisco has administered at least one vaccine dose to 50 percent of residents over the age of 16. On April 15, vaccinations will be available to every Californian over 16. Right now in San Francisco it’s available to those who work in healthcare, food and agriculture, certain social services, education; those who are at least 50-years-old; those who are homeless or in congregate living sites; and those living with qualifying health conditions.

The Excelsior site runs Wednesdays, Thursdays, and Saturdays from 9:30 a.m. to 3:30 p.m., and on Fridays from 12 to 6 p.m. with an initial capacity of 150 doses a day, which organizers hope will ramp up. Though people may register for appointments on-site, same-day shots are not promised. People are encouraged to contact Excelsior Strong or the Latino Task Force to schedule an appointment.

“I’m proud to be standing at this site, which has been used as a parking lot, kids ride their bikes through here when they’re not on their Zoom classes, it’s also been a place of refuge for our houseless neighbors,” Grande said. “And now it’s going to be a place that saves lives.”

Given that supply of the vaccine remains extremely limited, the Excelsior site is by appointment only with limited drop-in availability. Excelsior neighborhood residents and workers can call Excelsior Strong/Latino Task Force at (415) 562-8638 to schedule an appointment.

To see other neighborhood vaccination sites and options in English o en español, go here. For general San Francisco information on eligibility and where to get a vaccine, go here.

Thank you all for making our campaign a success. To all those who have not yet donated, WE NEED YOU.

‘And we love and take care of all of them’

Thu Apr 8 , 2021
This family of nine is not here to justify their large family. Aaron and Latovia Cheatham of Phoenix, Ariz., are the proud parents of seven children (Maliah, Jordyn, AJ, Ariana, Olivia, Brandon-Michael and Josie), whose ages range from 8 years to 11 months old. Recently, the family went viral after […] 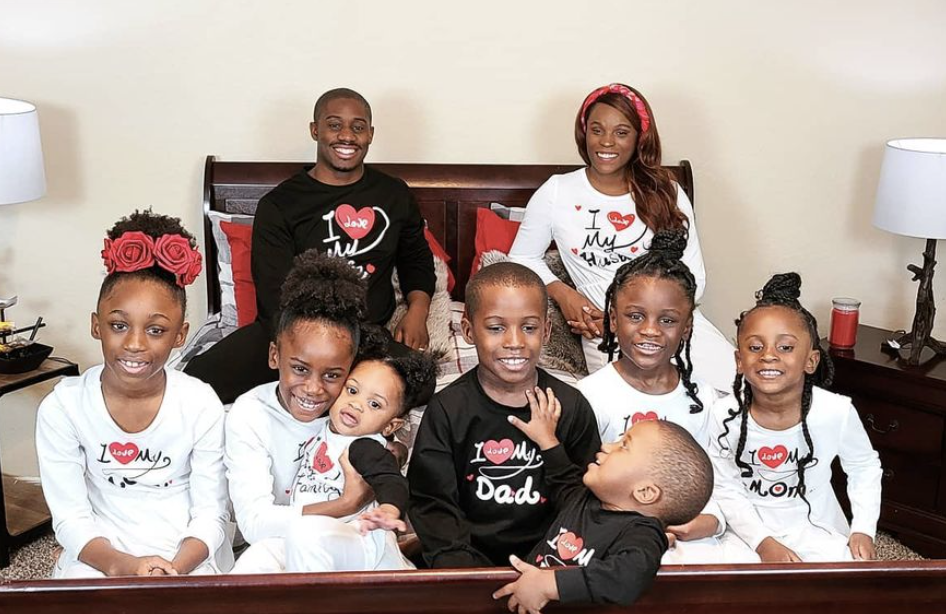