“Basically you’re playing a game of imagination,” said former Rep. Steve Israel (D-N.Y.), who led House Democrats’ campaign arm in the 2012 election cycle, amid the last redistricting. “You have your players lined up in your recruits,” he added. “You have an offensive or defensive strategy, depending on the environment. […]

“You have your players lined up in your recruits,” he added. “You have an offensive or defensive strategy, depending on the environment. The only problem is you don’t know where the field begins and ends.”

Redistricting is already a daunting task under normal circumstances. The 43 states with more than one district must redraw 428 seats as quickly as possible before the 2022 primaries. But they can’t begin until they know the population size per seat, numbers that should have been available by Dec. 31.

The Census Bureau said Wednesday it may not be able to deliver those topline numbers before late April. Even once those figures are clear, they still have to provide the granular, block-level data to states so they can draw districts of equal population — a process that is supposed to be completed by the end of March, but could stretch past July 31 this year.

“I think a lot of states are going to have to look at changing their election calendars for next year because of the census delays,” said Adam Kincaid, the executive director of the National Republican Redistricting Trust, the party’s data clearinghouse for the cycle. “We’re looking at a very compressed timeline for redistricting.”

The long delay is keeping both parties in a state of limbo: Democrats, who are eager to protect and bolster their historically narrow majority, and Republicans seeking to regain control of the House in the first midterm election of Joe Biden’s nascent presidency.

The lag is most disruptive in New Jersey and Virginia, two states with state legislative elections this year. It’s also a particular headache for the 17 states that are likely to gain or lose a district, which will necessitate a significant reshuffle of their maps. Party strategists aren’t sure which districts they can conceivably target, and incumbents don’t know if they will be left without a seat at all.

The scramble will be acute in the Rust Belt; Michigan, Illinois, Ohio and Pennsylvania are all shedding a district and at least one member from each of those delegations will find themselves without a seat. California is likely to drop a district for the first time since in state history.

Meanwhile, Census estimates show that Alabama and New York could be fighting over the final seat. Alabama would drop to six seats if it drops one. If it’s New York that falls short, its delegation would shrink down to 25 — a two-seat loss from the past decade.

Democrats and Republicans are formalizing their redistricting infrastructure, opening lines of communication with the state legislatures that will draw the new districts. Each party will be more plugged into the process in states where they control both chambers of state government and the governorship.

For Democrats that’s places like Illinois, New York and Oregon. For the GOP, that includes the seat-rich states of Florida and Texas. Florida is likely to gain two seats, and Texas is on track to add three.

“I would like to think that two out of the three will be Republican seats,” GOP Rep. Roger Williams, a former Texas secretary of state, said in an interview late last year.

For now, both parties are moving forward and trying to make plans with the limited information they have.

“Don’t get into paralysis by over-analysis. That’s going to have to be our posture,” said Tim Persico, the newly installed DCCC executive director. “We’re never going to get this 100 percent right. But waiting to move our plans into action until we have a crystal clear map of what comes next isn’t an option when the stakes are this high.”

Democrats and Republicans have begun recruiting in smaller states unlikely to be seriously affected. Montana’s at-large district is dividing into two, a split that will bifurcate the state and likely create one competitive seat, for which both parties have started thinking about potential candidates.

Tracking the people, policies, and emerging power centers of the Biden Administration.

But beyond those small-state seats, the parties are forced to look for new candidates — and worry about exactly where they’ll run later. Democrats are looking in the Philadelphia area for someone to take on GOP Rep. Brian Fitzpatrick, and for others to run against incumbents in South Florida and Orange County, Calif.

The National Republican Congressional Committee, meanwhile, will need to find candidates in the Detroit area who could take on Democratic Reps. Haley Stevens and Elissa Slotkin; in the greater Atlanta area for Reps. Lucy McBath and Carolyn Bourdeaux; in the Twin Cities for Reps. Angie Craig and Dean Phillips; and the Hudson Valley of New York, where Democratic Reps. Antonio Delgado and DCCC Chair Sean Patrick Maloney serve.

“Are there logistical unknowns and new dynamics? Of course,” said Dan Conston, president of the Congressional Leadership Fund, the main House GOP super PAC. “But I believe there will be a tremendous interest amongst top-tier, would-be Republican candidates in running because the opportunity for us to win back the House is significant.”

Maps drawn by independent commissions will perhaps be the most unpredictable. Michigan, Colorado, Arizona, California and Virginia are some of the more important states that require nonpartisan panels to draw maps.

For the first time, Democrats have a group solely dedicated to shepherding them through the redistricting cycle: the National Democratic Redistricting Committee, which will serve as a data and legal powerhouse, and a go-between for the DCCC and the various state legislatures and cartographers. It’s led by Eric Holder, the former attorney general for the Obama administration, and Kelly Ward Burton, who was at the DCCC during the last round of redistricting.

The GOP is firing up its equivalent organization: the National Republican Redistricting Trust, led by Kincaid and former Wisconsin Gov. Scott Walker. It has created a new 50-state redistricting database, amassing a trove of information on recent elections for states to use in making maps.

But all parties realize at some point they won’t be able to do much preparation without the data. Adding to anxiety is that the Census Bureau is considering withholding all redistricting data until numbers from all 50 states are ready, instead of releasing it on a rolling basis as it normally does. Kathleen Styles, a Census official, said Wednesday that no final decision had been made, while acknowledging the ongoing turmoil.

“This is the subject of a vigorous internal debate right now,” Styles said. “I think the worst thing we could do would be deliver data that had question marks with it. We need to give you the best data that we can.”

Redistricting is a deeply tumultuous two years for many members who are forced to jockey against their colleagues to come out of the process with their seat intact. And the party campaign chair members will be tested in their ability to guide their caucuses through awkward situations.

That’s certain to happen again, particularly when courts are forced to draw maps because Democrats and Republicans can’t come to an agreement. That could be the case in Minnesota, the only state in the country where the two legislative chambers are controlled by different parties. It is also probably losing a district — a big deal in a state that has prominent members, including Democratic Rep. Ilhan Omar and NRCC Chair Tom Emmer.

Former Democratic Rep. Collin Peterson (Minn.) said he warned his 2020 challenger, now-Rep. Michelle Fischbach, that the district they were battling over could be collapsed in the redraw.

“I tried to tell her that when she ran in the first place. She may be a one-term wonder,” he said, before offering a more specific prediction: “I think what’s going to happen is that Emmer and Fischbach are going to get put together — and they deserve it.”

Zach Montellaro contributed to this report.

Thu Jan 28 , 2021
RELATED STORIES This week on The Unicorn, a sleepover begets overthinking, when Shannon spends the night at Wade’s. In tonight’s episode, titled “Overnight Sensation” and airing at 9:30/8:30c on CBS, Wade (played by Walton Goggins) wants to invite Shannon (Natalie Zea) to spend the night, but first he needs to […] 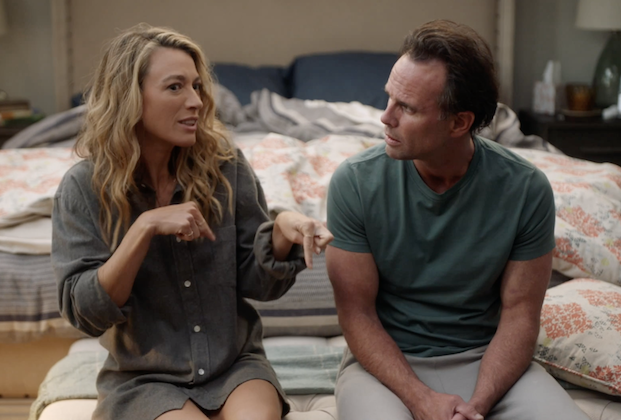