It was the type of windfall that investors pine for with every rally on Wall Street: $1,205,619.56 had inexplicably ended up in the brokerage account of a 911 dispatcher in Louisiana in February. But the next day, when Charles Schwab tried to recover the money it had deposited in error […]

It was the type of windfall that investors pine for with every rally on Wall Street: $1,205,619.56 had inexplicably ended up in the brokerage account of a 911 dispatcher in Louisiana in February.

But the next day, when Charles Schwab tried to recover the money it had deposited in error into the account of Kelyn Spadoni, the authorities said, about a quarter of the funds were already gone. For about a month, the company said, calls, emails and text messages to Ms. Spadoni went unanswered.

The funds had been transferred to another account and used by Ms. Spadoni to buy a house and a Hyundai Genesis S.U.V., according to the Jefferson Parish Sheriff’s Office. She was arrested on fraud and theft charges on April 7 and fired as a dispatcher the same day, the Sheriff’s Office said.

In a lawsuit filed against Ms. Spadoni in federal court in New Orleans, Charles Schwab said that it was supposed to have moved only $82.56 into Ms. Spadoni’s Fidelity Brokerage Services account, but that a software glitch had caused it to mistakenly transfer the seven-figure sum.

“I think most people understand about how much money is in their bank accounts,” Capt. Jason Rivarde, a spokesman for the Sheriff’s Office, said in an interview on Monday. “When you’re expecting $80 and you get $1.2 million, there’s probably something wrong there.”

Ms. Spadoni, 33, of Harvey, La., has been charged with bank fraud, illegal transmission of monetary funds and theft greater than $25,000, the authorities said. She had been a dispatcher for four and a half years in the parish, just outside New Orleans.

She did not respond to phone and email requests for comment on Monday or Tuesday, and there was no record that she had a lawyer.

Ms. Spadoni was released on $150,000 bond on Thursday, according to Captain Rivarde, who said that a vast majority of the missing money had been recovered.

A spokesman for Charles Schwab said in an email on Sunday night that the company was fully cooperating with the authorities in an effort to resolve the issue, but declined to comment further.

Recipients of cash wired in error are typically required to return it.

James J. Angel, an associate professor of finance at Georgetown University’s McDonough School of Business, said those were examples that generally involve a recipient who does not have a “natural claim” to the funds.

“In general, if it’s not yours, you’ve got to give it back,” he said, emphasizing that he was speaking generally, and not commenting specifically on the Spadoni case. “Somebody who is not expecting it, hasn’t requested it, and it suddenly shows up? It was obviously an error.”

But a federal judge’s ruling this year offers a prominent exception. In 2020, Citigroup accidentally wired $900 million to a group of lenders, intending to make a small interest payment on behalf of the beauty company Revlon, but instead repaying them in full.

Some of the lenders, who had sued Revlon and Citi seeking repayment of the loan, refused to return about $500 million. In February, Judge Jesse M. Furman of the U.S. District Court in Manhattan ruled that the recipients did not have to return the cash because they had reasonable grounds to believe the payment was intentional.

The “Citigroup case is definitely an outlier because they had made a previous claim on the money,” Dr. Angel said.

John C. Coffee Jr., a Columbia Law School professor, said someone who finds money has a legal obligation to try to make restoration.

“Even if Schwab was negligent, that doesn’t give her a right to hold on to this found property,” he said. “These cases come up now and then. Bank delivery trucks do get into car crashes, and money does come out behind them, and the police and others want you to give it back.”

According to Schwab, Ms. Spadoni opened the brokerage account in January, and the excess cash was added to a transfer request that she made in February.

Realizing the mistake, Schwab tried to reclaim the money through a computer system, but got a message that said “Cash not available,” the lawsuit said. A second attempt was also rejected, and Schwab received a message that said: “Insufficient funds, please work directly with the client to resolve.”

A Schwab employee called Ms. Spadoni four times but was unable to leave a message during two of those attempts because her answering machine was full, the lawsuit said. A corporate counsel for Schwab then called Ms. Spadoni at the Sheriff’s Office but was told that she was unavailable, according to the lawsuit, which said he then sent several text messages.

In its lawsuit, Schwab said that it had begun an arbitration proceeding against Ms. Spadoni with the Financial Industry Regulatory Authority, but that it would take two months for a resolution to the case. The company said it filed the lawsuit because it wanted to make sure that Ms. Spadoni did not spend the mistakenly transferred funds before the arbitration hearing.

“When you take something that obviously doesn’t belong to you,” Captain Rivarde said, “that would be theft.”

Tue Apr 13 , 2021
Wright’s mother Katie describes the last phone call with her son before he was shot by a Brooklyn Center police officer Sunday afternoon. MINNEAPOLIS — “Say his name, say his name,” says Naisha Wright, the aunt of Daunte Wright – a powerful moment, as the family of George Floyd stands […] 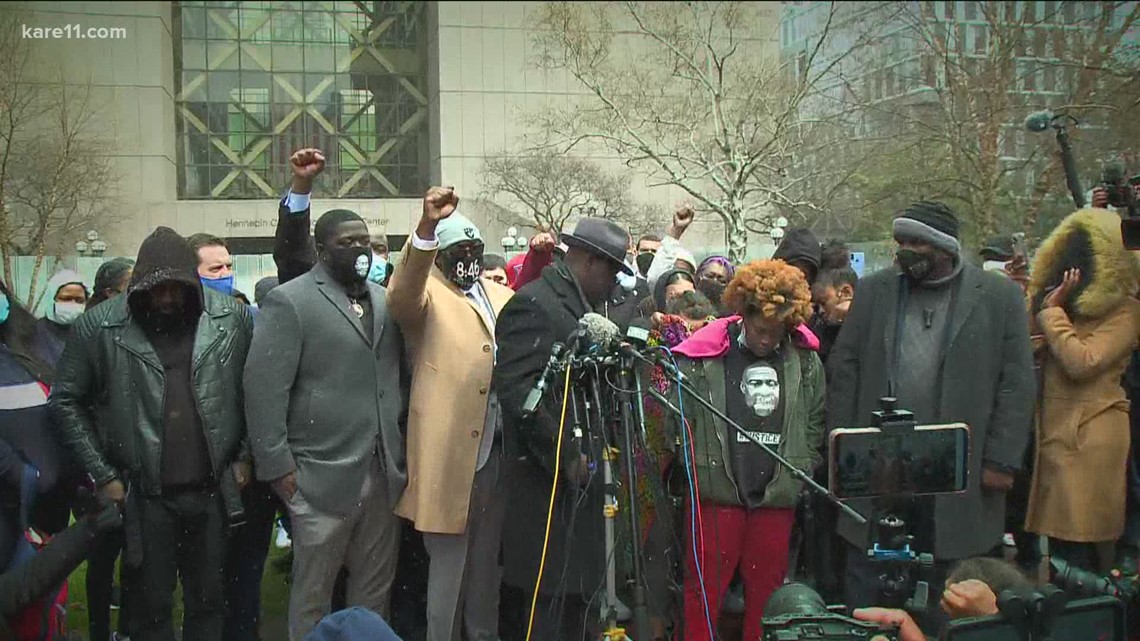