SIOUX FALLS, S.D. (KELO) — The Pillsbury house, built by the family that went on to create the Pillsbury Dough company, is on the move. The historic farm house is no longer standing where it was built more than a century ago at the corner of Veterans Parkway and East […]

SIOUX FALLS, S.D. (KELO) — The Pillsbury house, built by the family that went on to create the Pillsbury Dough company, is on the move. The historic farm house is no longer standing where it was built more than a century ago at the corner of Veterans Parkway and East 41st street in Sioux Falls. It is being moved to a new location near Baltic. The house has occupied this spot since 1889, you are witnessing the first few inches of a 27 mile journey to its new home near Baltic.

Dale Hoefling has been moving houses for 20 years, he says he began working with power companies to plan a route to coordinate the move last spring.

As you can imagine balance is the key to moving something this big. Hoefling says the house sits on 4 dollies that can handle 40 tons each.

“Them beams in there so there is the same amount of weight on each side, when I’m rolling down the road and this one I hit perfect,” Hoefling said.

This house is the ultimate mobile home it is 42 feet to the top and this thing it is heavy.

“It weighs only a hundred ton,” said Hoefling.

Soft ground and unbalanced loads are two of the biggest dangers house movers face. Hoefling says the third thing, believe it or not, is something as simple and unassuming as your mailbox.

“More houses are lost going down the road driving around a mailbox because the other tires get off the road too far and you don’t get it back quick enough,” said Hoefling.

While Hoefling is outside supervising, it takes a steady hand to drive the truck. Tyler Hudelson is at the controls today. He says moves like this usually draw a crowd.

“You get lines of people watching us go by, love it when they honk the horn, and stuff. A parade with a big house, we’re the only ones,” Hudelson said.

The Pillsbury house completed part of its journey today. They drove it across a corn field to 6 mile road where it will sit until next Tuesday. Then it will begin the final leg of its Journey to its new location near Baltic.

Let’s face it, it probably would have been easier to tear it down, but both buyers and seller see more than just a collection of boards and nails and paint. It will be place with that will once again house the laughter of children and the creation of memories. In 27 more miles it won’t just be a house, it will once again be a home.

The new owners of the house, Kevin and Katie Hoekman of Baltic have 4 kids.
They’ve always admired the house and are anxious to get it set up, and move in.

Sat Feb 20 , 2021
Like pretty much everyone else, San Jose residents Tom and Vickie Geary had to get used to a new normal because of the COVID-19 pandemic. Part of their pre-pandemic routine had been going out for fine dining once or twice a month, and as last summer drifted away, Vickie realized […] 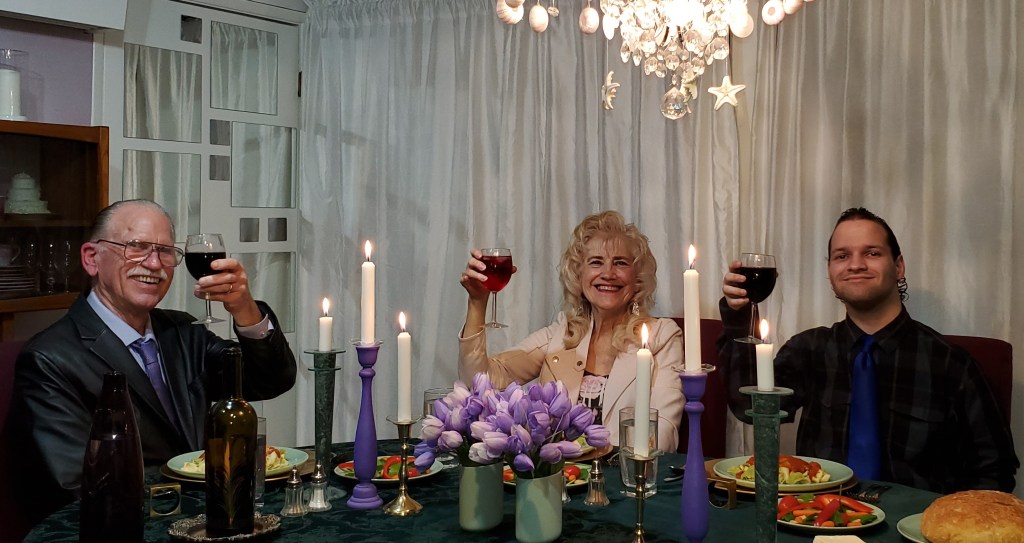