“No, I don’t support what the House passed,” Manchin told CNN as he left the Senate floor. “Not at all.” Manchin’s opposition underscores a major divide among Democrats over how to tackle gun control — a key priority for their voters — even as the party now controls Congress and […]

“No, I don’t support what the House passed,” Manchin told CNN as he left the Senate floor. “Not at all.”

Manchin’s opposition underscores a major divide among Democrats over how to tackle gun control — a key priority for their voters — even as the party now controls Congress and the White House and faces intense pressure to take action in the wake of a massacre at a Colorado supermarket that left 10 dead, including a store manager and a police officer.

The chances the Senate could pass any gun legislation remain highly unlikely given that would require significant Republican support to overcome a filibuster. But Manchin’s stance shows that Democratic leaders would not even be able to count on votes from their entire caucus for gun legislation passed by the Democratic-controlled House, making any effort to pass the bills even more challenging and divisive for their party.

“I’m still basically where Pat Toomey and I have been: The most reasonable responsible gun piece of legislation called Gun Sense, which is basically saying that commercial transactions should be a background checked. Commercial, you don’t know a person. If I know a person, no,” Manchin said.

The recently passed House bills would expand background checks beyond Manchin-Toomey, which failed to advance in 2013, to include transactions between private parties, at gun shows or over the Internet and would close the so-called Charleston Loophole, by extending the time a licensed gun sales can go through before required background check is completed.

Democratic Party leaders are promising action on gun legislation despite the grim legislative outlook in the aftermath of the Colorado shooting, which came less than a week after another string of tragic shootings in the Atlanta area.

Senate Majority Leader Chuck Schumer said Tuesday that “this Senate will be different” with Democrats in control as he promised that the chamber would take up debate on gun legislation.

President Joe Biden on Tuesday used the latest mass shooting to offer his most vocal push for gun control since taking office. In somber remarks from the White House State Dining Room, he said he would do everything in his power to keep Americans safe.

“I don’t need to wait another minute, let alone an hour, to take common sense steps that will save lives in the future,” he said, listing a ban on assault weapons and high-capacity magazines, as well as strengthening the background check system by closing loopholes, as areas he would like to see Congress act.

Asked if he would make a fresh push now in the wake of several recent mass shootings, Manchin said he would wait for the House to send their bills over first but he promised, “We’re going to try to do the responsible, reasonable thing.”

Separately, Toomey of Pennsylvania said passing their legislation through the 50-50 Senate “is going to be difficult” but said there are “discussions underway.”

He would not characterize those talks other than saying, “I don’t want to get specific, but there are conversations happening.”

Wed Mar 24 , 2021
From left: Aubry, Mark, Lisa and Sam. (Courtesy of Lisa Henderson) Our news is free on LAist. To make sure you get our coverage: Sign up for our daily newsletters. To support our non-profit public service journalism: Donate Now. The things we do for family. Consider the Henderson/Deetjens of South […] 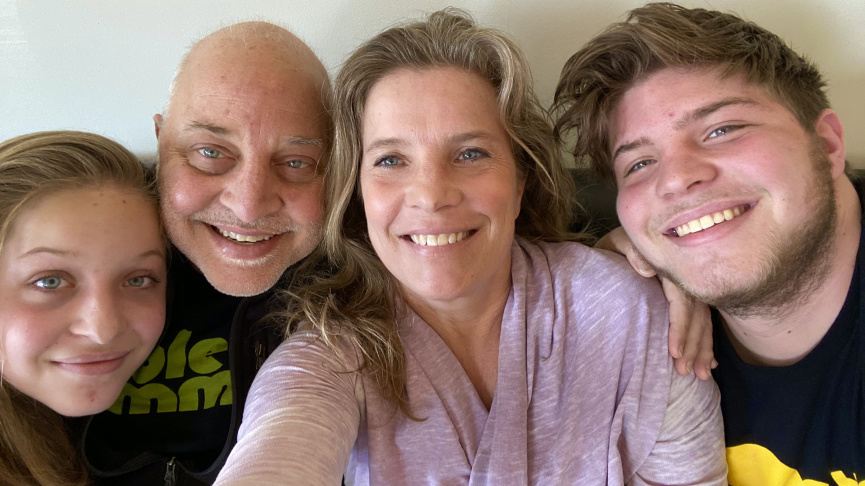