COLORADO SPRINGS, Colo. (KRDO) — After the emergence of a sinkhole earlier this week in the Briargate neighborhood of Colorado Springs, multiple residents in a nearby recently-built subdivision tell 13 Investigates the sinkhole wasn’t the only problem. “We loved the neighborhood,” said Jason Duffy Langeland, who moved into the Cordera […]

COLORADO SPRINGS, Colo. (KRDO) — After the emergence of a sinkhole earlier this week in the Briargate neighborhood of Colorado Springs, multiple residents in a nearby recently-built subdivision tell 13 Investigates the sinkhole wasn’t the only problem.

“We loved the neighborhood,” said Jason Duffy Langeland, who moved into the Cordera neighborhood in December 2018. “We thought it was the place to build in Colorado Springs, the aesthetic of the homes and how beautiful they were. It was really exciting.”

However, as soon as he moved into his new home, Langeland says problems began to emerge, including the sinking of sidewalks, roads and even parts of his own home that began dipping into the earth. Langeland also tells 13 Investigates repairs from the developers, La Plata Communities, have been inconsistent.

“The streets are randomly repaired and it looks like a bunch of patchwork,” the Cordera homeowner said.

Uneven sidewalks can be seen all over the Cordera neighborhood as the concrete slabs have started sinking into the ground.

Then at the intersection of Hanging Lake and Horse Gulch is Branden Cobb’s home, but the front of Cobb’s driveway is cracked in the middle and collapsing. Cobb says the issue has been going on for a year, and La Plata Communities has made no effort to fix the issue.

This week, just a few blocks away from both Cobb’s and Langeland’s homes, a sinkhole emerged near the intersection of North Union Boulevard and Sky Pond Lane. According to Kim Melchor with the City of Colorado Springs, the road is currently owned by the developer, La Plata Communities, and there is no evidence of a water main break.

“The developer will handle the investigation and repairs moving forward and hopes to have the street open by the end of the week, depending on weather and resources,” said Melchor.

For Langeland, his greatest fear is damage to his newly built home. The recent homebuyer has already seen parts of the landscape of his property begin to sink.

“Where the water comes into our house, the area in our landscaping has dipped down and sunk in,” Langeland explained.

Langeland says he brought these concerns to La Plata Communities but has had very little communication with the developers. However, Langeland did receive an email from La Plata with an explanation for the recurring issues.

“La Plata Communities is aware of the dips in the roadway pavement of Rifle Falls, Horse Gulch, Hanging Lake, Captain Jack and Mount Rosa. After some investigation, La Plata believes the dips in the road were caused by breaks in some of the underdrains (pipes under the road that carry subsurface water) under these streets.  The breaks in the underdrains have been repaired or are in the process of being repaired.  Once all of the underdrains have been repaired, the streets will be repaired.   La Plata will work with their contractors and consultants to develop a schedule for the street repair work to be done.”

Mike Ruebenson with La Plata Communities said the problem stems from the underdrains being installed wrong by a subcontractor.

Ruebenson said this is “a very unusual problem” but added that 90-95% of the underdrains had been repaired as of Tuesday. He said repair workers are still making sure there aren’t any more separations or additional problems from the original installation, and once they’re all taken care of, they’ll begin above-ground repairs on the streets and sidewalk.

However, no timeframe was given for the repairs.

Langeland fears the issues will only continue to worsen causing foundation issues to his property. He’s concerned the issue will prove costly, and that repairs will become a reoccurring theme for homebuyers in the Cordera neighborhood.

“We are talking about water and wastewater lines that lead right up into our houses,” said Duffy Langeland. “Those do go underneath the house. I think it’s all from the collapse of everything under the streets causing everything else to be pushed down, and making everything sink.”

Ruebenson said if anyone has issues with their driveways or sidewalks near their property to call their builder or La Plata Communities directly.

If you have a tip or lead you want our investigative team to look into, please email us at [email protected]

Thu Jul 22 , 2021
HOUSTON – Residents in the Brenwood subdivision said their cluster mailbox has been vandalized and broken for two months. Tony McCalpine said the mailboxes lock was broken, leaving the back door open, and the mail unsecure. “I reached out to the Post Office to find out what was going on […] 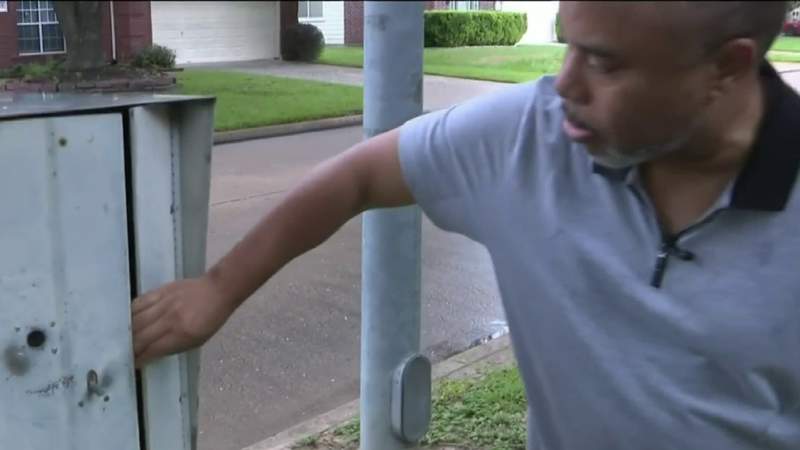