The finale of Facebook Watch’s At Home with the Robertsons tackled the hot-button topic of gun control. The Robertsons, of Duck Dynasty fame, discussed whether their views on the issue differ generationally.  Korie and Willie Robertson were joined by daughters Sadie and Rebecca Robertson, along with their husbands, Christian Huff and […]

The finale of Facebook Watch’s At Home with the Robertsons tackled the hot-button topic of gun control. The Robertsons, of Duck Dynasty fame, discussed whether their views on the issue differ generationally.

Korie and Willie Robertson were joined by daughters Sadie and Rebecca Robertson, along with their husbands, Christian Huff and John Reed Loflin for Thursday’s show.

“None of us like seeing mass shootings,” Willie began.

Loflin proposed the idea that people who want a gun should have to take a class similar to that of the hunter safety course. “That would at least help with say the accidental shootings at least.”

“I think that there should be some kind of class that you have to take before you’re able to own a gun,” Korie agreed. “It could make a difference in the gun deaths, not mass shootings necessarily.”

Sadie and Christian, who have a gun, were asked about their stance on gun safety with a baby on the way. (She has since given birth to their first child.)

“I definitely think that I would not want to have my kid around a gun, but I do think that for us, I think it’s smart to have at least one gun in the house just from a protection issue,” Christian said. “For me, like the gun and the bullets are separate so you’d have to be smart enough to know how to load it, how to cock it, how to do all these different things. I think I’ll definitely train our daughter when she gets of age as I’m sure we’ll go hunting with her some. So I’d definitely like for her to have practice before you put her in that situation.”

Willie noted they keep their guns locked up at home and “kids are taught at a very young age to respect weapons.”

“We don’t flash them around, we don’t leave them laying around, we don’t point them at anyone, treat every gun as a loaded weapon,” he continued. “There’s a list of rules my kids have heard since they were children, it’s the same rules I heard so there’s a respect.”

When the conversation turned to freedom, Sadie chimed in: “If they take away guns and then people who are bad people get guns ’cause they’re gonna figure it out, and then the people who are just good people and chillin’ don’t have guns, that seems very dangerous.”

“You just gotta remember when you start taking away freedoms, the more you start taking away those rights and losing freedom based on what somebody else thinks that you should do… I’m telling you, you may look up and go ‘Oh no, well they took that and they ran with it,'” Willie said, acknowledging freedom can “allows for bad things to happen too,” noting how someone can kill people with a car.

“Is it the gun or is it the person?” Willie asked.

“I do think that there should be things put in place to where we can help minimize the danger of it,” Sadie said.

Fri May 28 , 2021
OAKLAND — A 28-year-old man was shot Thursday in an East Oakland neighborhood, authorities said. Shortly before 3 p.m., officers responded to reports of ShotSpotter activity near 20th Street and East 22nd Avenue in the city’s Highland Terrace neighborhood. They learned a man suffering from a gunshot wound to his […] 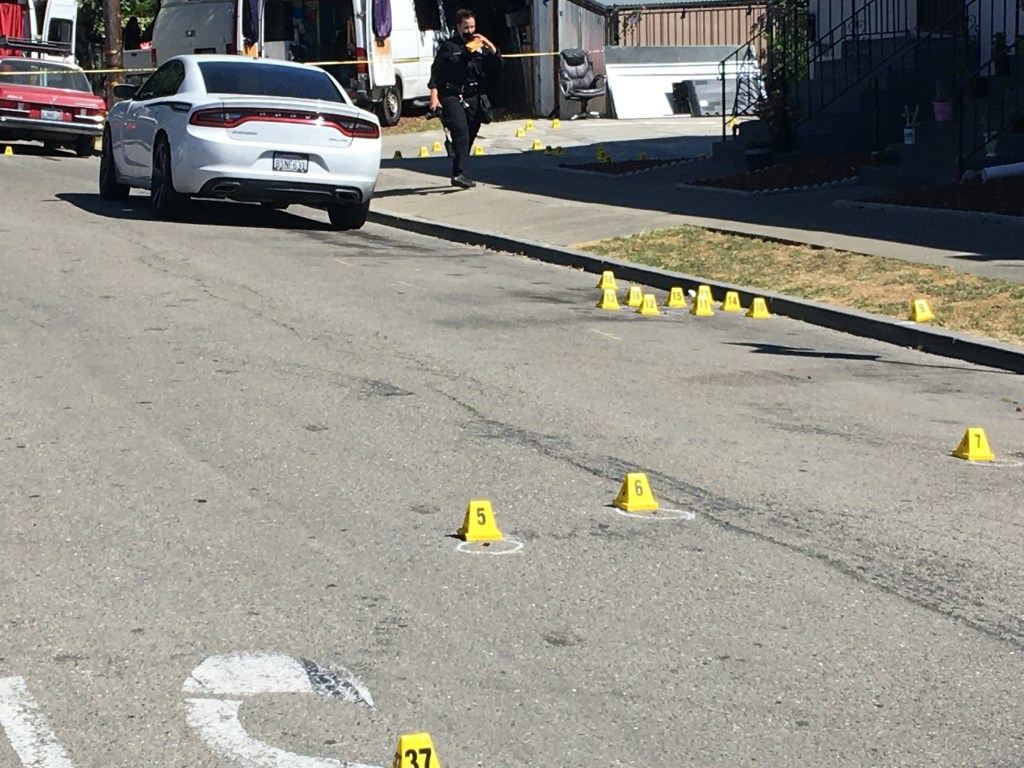